That's when I realized...

So...sometimes I go into these phases where I just think about the oddest things...it's usually times like these that I get inspired to write a song or a poem and (although Tammy always makes fun of me) it's always like 2 in the morning and I end up getting out of bed to write it down so I don't forget it and then end up sleeping for like 3 hours. Last night I was thinking about what actually makes a person the person they are? Life experiences, genetics, environment, etc? Then I had two very vivid memories that I remember having a major "A-ha!" moment. Okay, so I didn't get up in the middle of the night to write a poem about it but I just wanted to write about those two moments that I'll always remember and when I learned two very important life lessons.

The first memory: I'm about 8 or 9 years old. Our family has rented a cabin up at Fish Lake for about a week in June and we're all in a mad rush to pack up the car and take off for our vacation. My mom tells me to pack a bag (which she has probably already half packed with all the necessities and asked me to pack so that I had some sense of independence) and to put my bag in the car. So, I go into my room and throw in some clothes and shoes or whatever. Our family takes off and we're on our way to Fish Lake. I was so excited that I wore my really stylin' hot pink swimming suit and biker shorts all the way there, just so that I would be totally ready to jump in the lake when we got there. Little did I know the water is like 50 degrees, but that just doesn't matter when you're 8 years old. So, we get to Fish Lake and start unloading the car and I'm sort of getting sick of having just hot pink spandex on, so I go to get my bag and....what?...it's not in the car?...well, isn't somebody supposed to do that for me?....I am the princess, right?....What?...I was supposed to do it MYSELF??? So, this was the moment I realized that in life, you're not always going to be completely catered to and taken care of. Even if you are a princess. :D

Below you can see me sportin' the same swimming suit that I was wearing on that trip. Very very spandexy. 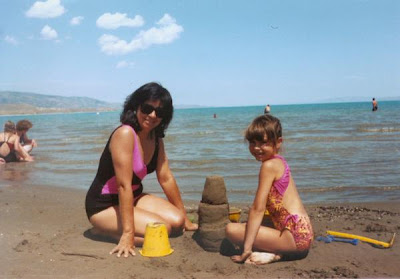 The Second Memory: Well, for some background, my dad is probably the smartest person you could ever meet. He did actually read the dictionary and encyclopedias for leisure as a kid. No kidding. So, this came in handy growing up when I would have a homework problem or be writing a report and I would just have to yell into the next room, "Dad?! What does circumambulate mean?" And he would reply with the real Latin root for each part of the word and where the word came from and what sentences it could be used in, etc. etc. etc. So, when I was stuck on any problem I would just circumambulate into his room and he would help me with whatever it was. I think I was in about 10th grade and I had a tough math problem that I just couldn't figure out so I brought my math book into his room, sat down, handed it over and waited for his long explanation about variables, summations or whatever. When he stared at the page for about a minute or so and handed it back to me saying "I don't know, you'll have to read the book a bit more to figure it out.", I thought that I was in some kind of twilight zone. It was at this moment that I realized, my Dad is not the all-knowing, all-powerful God-like person that I always thought he was. It was actually kind of a sad moment for me. I would actually have to figure some things out for myself?? Now that I'm older, I've had a reverse epiphany and I've realized that NOBODY is all-knowing or all-powerful - but my Dad is the closest person to this that I'll ever know. :) 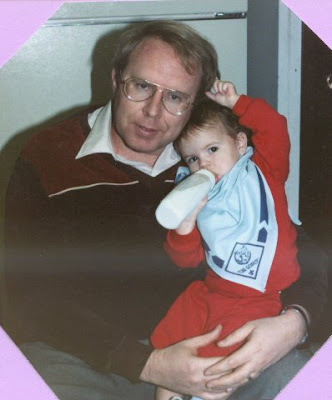 *sniffle, sniff, sniff* That. Was. Beautiful. I think we can all relate...

The reason you are who you are is because your fabulous sister fought off all the bullies and was so nice to you. That is why you are a happy, charming beautiful girl with a beautiful forehead.
I seriously had tears in my eyes. Daniela, even though I always make fun of your poetic talent and waking up at 2 a.m. to write down your deep thoughts, I'm jealous that you can incorporate your feelings into these beautiful poems and stories. Even the stories you just told us were beautiful. You are very talented and I love you for it! You are a special spirit.