Here is the first of many posts about the Powell trip.
One of my favorite memories of the trip was feeling a little tap on my foot by Michael, waking Brandon and I up to go early, early morning fishing. I really don't know if Mike got any sleep on this trip since he was usually sleeping on the back of the houseboat with a few fishing rods in the lake throughout the night catching catfish. Sure enough, he was our alarm clock that morning and we quietly gathered some drinks, jumped in the fishing boat and the motor slowly pushed us out into the middle of the lake. I have always heard my Dad and brothers talk about their memories of striper fishing at Powell but had never experienced it until then. Mike killed the engine and told us to listen for splashes of water. The large stripers are able to actually herd much smaller fish called Shad (or Chad?) and push them to the surface of the lake where they will have a feeding frenzy. This is called a "striper boil" and this is what we were listening for. We all sat in silence, straining our eyes across the calm water as far as we could see for any sign of a flipping tail or silver striper body out of water. My ears were straining so hard to hear any faint splash of water, that the silence itself began to make noise. The horizon was beginning to take on a gradient of light that barely lit the lake to the east but left it completely black to the west, so we had to trust our ears for any boils that might occur on that side of the boat. In this moment with my brother and with Brandon, I sat in peace and amazement as the sky was changing imperceptibly from shade to shade as our place on the earth slowly turned toward the sun. So often in our everyday, urban lives, we become so accustomed to two different conditions of time: day and night. Sitting motionless on the lake that morning, I was reminded of the eternal and constantly changing conditions of time. (dawn, sunrise, noon, evening, dusk, twilight...) Every minute seemed to completely transform the landscape around us. The constantly changing light began to slowly illuminate forms around us that seemed dead and gray just moments before. The black water started to turn a deep blue. the eastern sky began to turn a light yellow and then a dull orange. The color on the horizon became more and more intense until the cliffs to the west that seemed to be in hibernation were suddenly ablaze. The great ball of fire that rose over the horizon colored our skin the same glowing color of the cliffs the second it escaped the shadow of the eastern hills. This transformation of light and time all happened as we were chasing what we hoped were beginnings of striper boils and as we trolled the lake for stripers. I was lucky enough to wrestle two huge stripers, and I mean WRESTLE. They are not only large fish but they can pull and fight like crazy. Once the sun came over the horizon, it wasn't soon until we were interrupted by the occasional skiboat or wakeboarder, so we headed back to camp where everyone else was just waking up for breakfast. It was truly a magical morning on the lake. 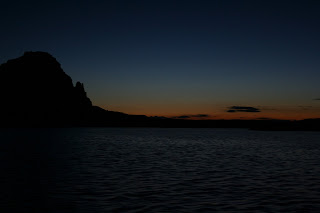 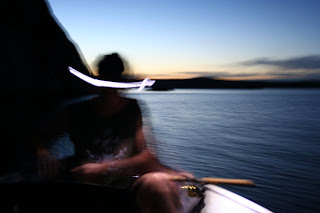 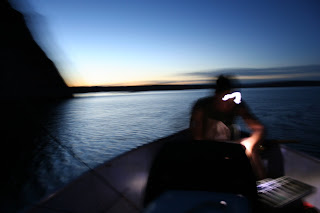 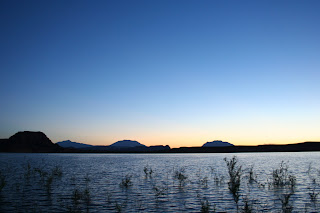 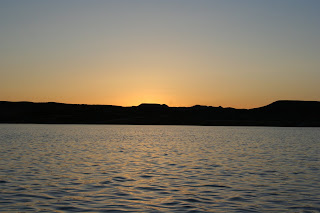 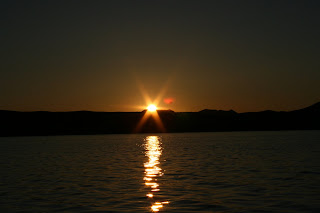 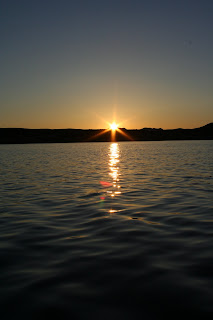 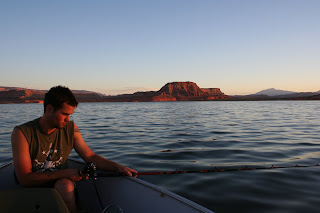 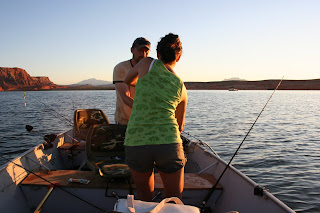 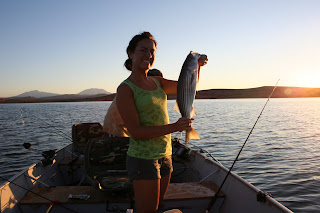 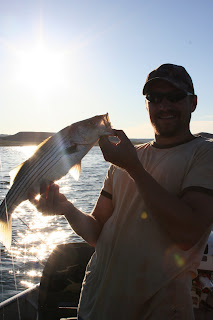 Thank you for the memorable fishing trip Mike. It reminded me of the moments of beauty that are waiting to be discovered everyday, as long as we are present enough in the moment to notice them.
Posted by Danielle at 2:02 PM

Awesome pics Danielle. I'm glad you jumped in the boat with me that morning.

Oh and by the way...loving every second of the pictures. That comment I made about being a part of your family next year, I was serious. I'll clean and cook and wait on everyone hand and foot. I'll be like that butler from Mr. Deeds that just pops out of nowhere and says "I am very very sneaky."

I'm so glad you could experience the joy of striper fishing.

Awesome pics! That looks like a blast! I love your very Julio-esque writing to :P

Damn it. I still haven't caught a striper.(stripper) ha ha.

Thanks for the post Dani. I also got to experience the morning fishing and will cherish it forever! AND you are right, those fish are Fighters!

You should tell your friend Jamie that she is welcome to come and wait on us hand and foot. It will be nice not having to talk like a pirate and wear a straw hat to get what you want from someone.
And this was a lovely post. It made my feet tingle to read it. That's a good thing.

Sometimes, when I say 'sootermi', what I really mean is, 'Fetch me a drink.'

P.S. It is now required to use the word verification word in a sentence at the end of your comment.