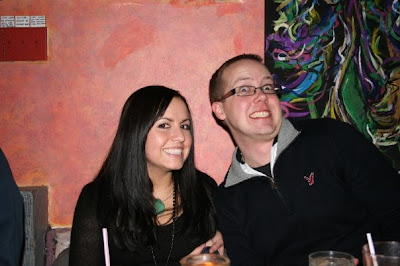 How we Met: Mike and I met during our first year of Architecture school but didn't really become good friends until last year when we went to New Orleans for one of our studios. Now we are like BFF along with Brittany and Dallas...who I will highlight in a future post. We both won the New Orleans competition and travelled back to N.O. a second time which was a blast...I would've been totally bored out of my mind if we didn't have each other on that trip!

What I Love About Him: He is not afraid to be himself and we can definitely be ourselves around each other. He is like a walking dictionary. Seriously. At least once a day I have to ask him..."um....so what exactly do you mean when you say ____". Here are two examples of words he might use in a everyday conversation...

Catachristic: A mis-use of phrase or mis-nomer.

Yes, I just asked him to give me some of his favorite "big" words and he spewed these upon me.

He's so intelligent and knows some of the most random facts. Like, did you know that the whale on Pinnochio is "Monstro"? I didn't. He did and acted completely disgusted that I wouldn't know this. Um, hello? Whateva Mikey.

I also love his constant gesturing while he speaks. Especially the occasional hip swing that he throws into his presentations.

Something to get to know him by:

On our trip to Germany we visited an awesome project by Tadao Ando. Sometimes Mike finds himself inexplicably drawn to architecture and can't help but become physical with it. 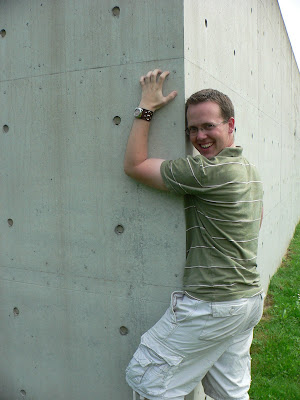 You are right...Mike is kind of a big deal and definitely entertaining to hang out with!

...this guy looks just like a neighbor of mine!...I am glad you guys keep each other entertained : )