The next friend highlight is Angela....

How We Met: Angela and I met probably in the womb...we grew up in the same neighborhood and were best friends for as long as I can think back! We only lived a few houses away from each other so we were always playing. We used to play night games with the neighborhood and play in each other's backyards....ahhh..the memories. We would jump on the tramp, swing, ride big wheels, etc. We actually went all the way from preschool through high school together! 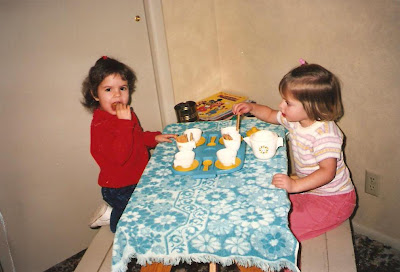 What I Love About Her: Once again, we can totally be ourselves around each other...this is what really makes a true friendship don't you think? When I think back to all of our memories, it's almost difficult to pinpoint one...I remember laughing. A lot. There was a lot of laughing. In class. When we're not supposed to.

I love how close we were growing up. We were so close that I swear our minds were on some kind of third dimension where we are partly psychic but only with each other...like we would show up to school ALL THE TIME wearing the same outfit. It was so weird. Also, I had a dream that she was pregnant before I even heard about it! Weird. We went camping once with her family and her mom said that in the middle of the night, we were fighting over a nintendo game in our sleep...so we were like sleep dreaming/talking together. Hmm....I wonder if she's reading my mind right now...are you Angela? Heehaw. 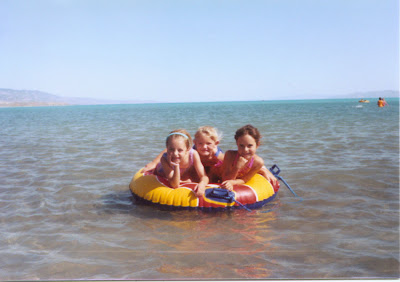 Something to get to know her by: Well, there are endless stories that I could tell. I'll tell one of my favorite stories.
Angela and I are probably about 16 and she's driving us to Hollywood Video in Riverton. We pull into the parking lot of Petersons and are slowly driving towards the parking lot when I sort of glance up above my head and out of the corner of my eye I see a really dark thing on the ceiling of the car. Immediately, my mind thinks "spider...about to fall on my head...get out..." and without thinking I start screaming about a spider about to fall on my head and I leap out of my seat and lay across Angela's lap (who is still trying to drive). Hearing my screams and something about a spider, Angela also starts to scream as we drive into the Hollywood Video parking lot. As we are both trying to get as far as possible from the spider on the ceiling on my side, we are both smashed up against the driver's side window...Angela's face was completely against the glass screaming and I'm pretty much on her lap trying to unbuckle my seatbelt. She finally pulls into the handicapped parking stalls at an angle where she puts the car in park and opens up her door...she has one of those cars that have an automatic seatbelt so as we both try to pile out of open door, the seatbelt slides forward and as we fall out (still screaming hysterically) we become completely entangled in each other and in the seatbelt. A lady walks by and is very concerned when she asks us if we're okay. As we finally begin to compose ourselves as we are laying on the asphalt by the car that is now taking up two handicapped spots, I look inside the car and discover that the "spider" is just a stain on the ceiling. We laughed even longer now that we knew we were screaming about nothing and people just passed by us wondering what on earth we were doing laying in the parking lot laughing.

Let me just say, I think that is one of the best laughs of my life!

Now Angela lives in New Mexico so we don't see each other that often, but she is a great friend and person! She has the two most adorable boys ever!

I miss you Angela! 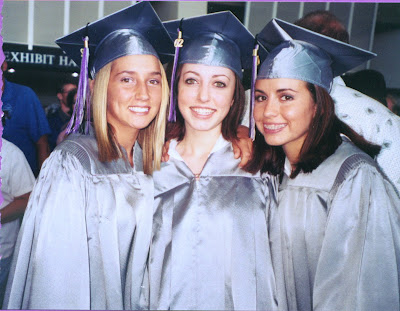 Right now I am laughing so hard it's scaring Drew. I forgot about that spider story, but I don't think anything has ever been so funny. We did dress the same almost everyday didn't we! Oh, just too good, I might have to post that story on my blog so that I don't ever forget it. We've had fun haven't we! Let's get together real soon.

That was a pretty funny story, mainly because I can picture it all in my head!

Loved the story...thanks for the laugh! You and Ang were always together...what would we do without our friends?

I remember Angela. Actually...so does James. He says he remembers calling you and Angela and (sara?) the three short girls, or something like that. He said you had lockers by him or something. DO you remember letting me go to lagoon with you guys? That was fun. Friends are the best! Too bad she lives so far away. That always stinks!

Great story. I just read it out loud to all the kids and we all got a good laugh out of it! - Antonio