The title to this post is meant to be chanted to that one baseball melody that ends with "dada daa da daaaa". (Do you have any idea what I'm talking about?) This is how Brandon celebrates cruises is with this chant and with his arms in the air. I'm making this post for two reasons: First, because Brandon's parents just booked a second family cruise for next May and we are super excited. It will be one week after I graduate and never have to go to school AGAIN! Yessss. The second reason is because last night I was watching "Hopkins" and it's a reality emergency room show - anyway, they were taping a young girl who was a drowning victim and she was probably five years old and they felt it was necessary to blur out her nipples. So, I've never really understood the need for covering up nudity...what is it about the naked body that makes so many Americans uncomfortable? So, in tribute to the cruise and in response to the blurred out nipples, here are some pics from Brandon and I's favorite place in the Carribean islands (so far). Cupecoy Beach, St. Maarten. (P.S. I was totally going to post the one of Brandon looking out into the water with his bum bum showing, but he found it hilarious to go into photoshop and make some alterations to the picture so now it is forever ruined.) Enjoy. 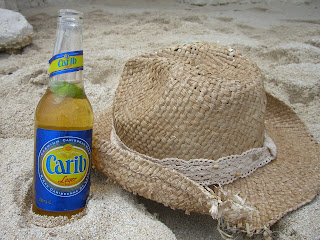 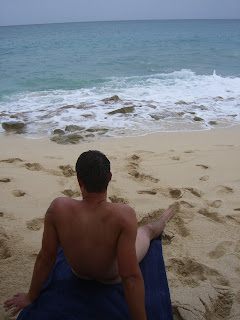 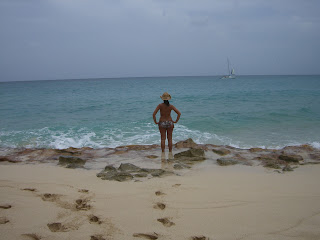 It's nice to be nekkid! Nice norge Brandon...

Ummm, I'm just a little uncomfortable seeing my bro in law (loud stage whisper)*nearly naked*! And Danielle. What would your mother say? Nevermind. I know exactly what she'd say. My reason for being uncomfortable with nakedness is that I know what everyone is thinking. They're thinking, DANG! She looks good! And I just don't want to have to fend everyone off. It's way too much stress for me.

D&B,
Brandon's Mom is pleased you are both so excited about the cruise next year. We'll have a great time, making memories to last a life time. I can almost hear the waves now :P

I'm so glad you are happy. Good for you guys that Brandon's mom is going to pay for you to have a fabulous vacation without me. Have so much fun. The end.

Put some clothes on!!! I love that beach...it's beautiful. Let's plan another cruise like the Mexican one...that was a blast! Then I can join you in your chant...cruise cruise cruise cruise...